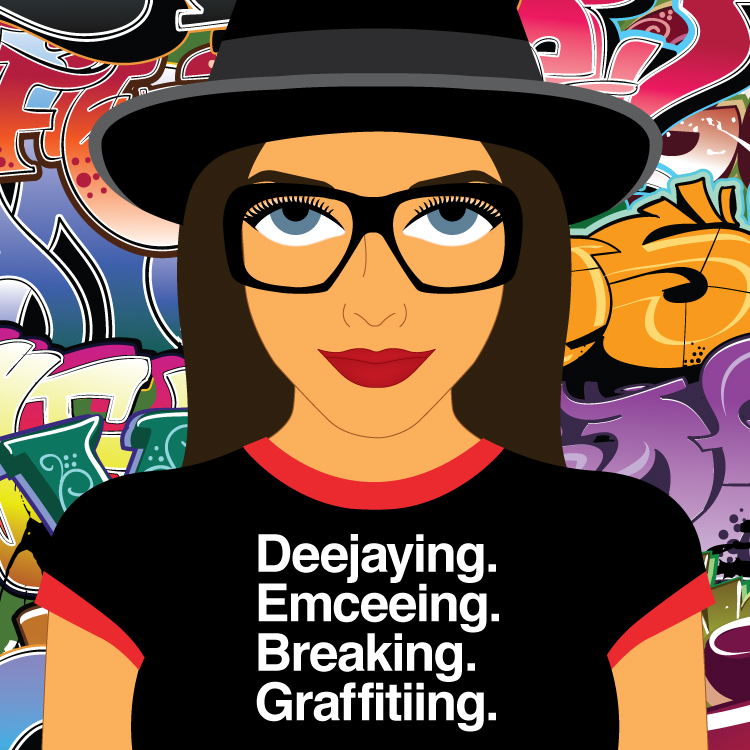 Amy Cinnamon considers herself an “accidental artist”…Thank the world for accidents; because of this “accident“ we have the pleasure of viewing her art. Her ability to capture the celebrities likeness but still keeping the cartoon aspect is really cool. She is a part of Mr. Chuck D’s artist collective mADurgency, and has had her work published. Read on to learn more about Amy’s craft, how she got started and some plans for the future.

Amy first fell in love with Hip Hop when she was just in the fifth grade. The song that caught her attention first was Rappers Delight. She says “It was like nothing I'd ever heard”. Soon after that she got to experience tracks such as The Breaks by Kurtis Blow and Freedom by Grandmaster ‪Melle Mel‬ and The Furious Five. Her and her friends memorized these tracks and nostalgically and admits that she’s been “hooked ever since“.

Though she first started creating art at the age of 12, it has been the last five years that hip-hop has been a large focus of hers in her art. Over these years she has created the likeness of Ice T, Queen Latifah, Ice Cube, ‪Grandmaster Flash‬, Chuck D, Flavor Flav, Tupac, and Run DMC. Her abilities have gotten her a place in Mr. Chucks D’s artist collective mADurgecny. Some of her work was featured on his latest literary achievement titled This Day in Rap and Hip-Hop History.

Her ability to capture the likeness of the artist is not by accident. She has a creative process that seems to work very well. When asked about the creative process she tells us “I start by gathering photos of my subject. I listen to music...all their music while I create”. Using the Adobe Illustrator, patience  and her process, she produces some of our favorite Hip Hop artist with spot on likeness. We can understand why Mr. Chuck D appreciates her artistry, once viewed. It’s fun, colorful and a part of Hip Hop history.

To view more of Amy’s work: